From the twists and turns of Italy’s Amalfi Coast drive to Argentina’s awe-inspiring mega-highway, Ruta 40, this round up of the world’s most scenic routes is sure to remind travelers of the age-old adage that the best part of any trip is the journey getting there.

Let’s start with an obvious one:

If you were expecting Route 66 to make an appearance on this list, we’re sad to say that it was officially removed from United States Highway System in 1985. However, why not enjoy the other iconic route that has popped up in several movies, from the 1939 western Stagecoach to cult classic Easy Rider? US Route 163 is an American Scenic Byway traveling through Monument Valley, cutting through the red rock desert of Utah and the Navajo country of Arizona, ending in the tiny town of Bluff, a picturesque historic settlement hidden away among spectacular 300-foot-high sandstone cliffs.

Moving further west, make sure to check out:

Long considered one of the USA’s most scenic roads, Highway One runs almost the entirety of California’s coastline, but the best part of this scenic route is in the Monterey region, where you can enjoy the magnificent seaside retreat of Carmel-by-the-Sea before moving on to California’s rugged Big Sur coastline, featuring magnificent cliffs, towering redwoods, and the famous Bixby Creek Bridge.

Staying in the USA, how about checking out:

Stretching 469 miles through the rugged peaks and rolling meadows of the Appalachian Mountains, the Blue Ridge Parkway has most certainly earned its nickname of ‘America’s Favorite Drive.’ The stunning scenery from the edges of Great Smoky Mountains National Park in North Carolina to just outside Virginia’s Shenandoah National Park make this a worthwhile drive, with the tiny mountain towns providing welcoming resting spots along the way.

Next on our itinerary, how about we take a drive along:

Not only is Ruta 40 the longest highway in Argentina (running almost the whole length of the country), but at an astonishing 3,195 miles, it is actually one of the longest routes in the world. From its southernmost point at Cabo Vírgenes, Ruta 40 meanders through the remote plains of Patagonia, winding northwards and flanked to the west by the magnificent peaks of the Andes. It passes by pristine lakes and bustling cities before reaching its highest point at Abra del Acay (an awe-inspiring 4,952 meters above sea-level) and finally reaches its end in the border town of La Quiaca – a true showcase of Argentina’s stunningly diverse landscape.

Switching continents, Europe is home to some breathtaking routes. If you’re looking for something short and sweet, why not take a drive along: 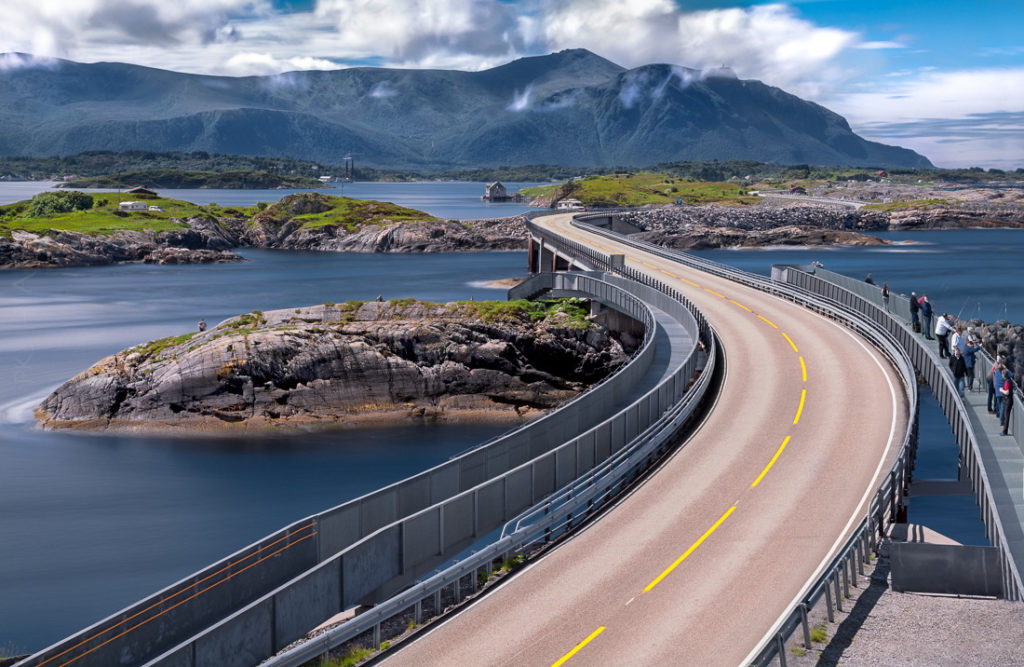 A shorter, yet no less impressive route is Norway’s Atlantic Road, which covers the 5 miles between the villages of Vevang and Kårvåg via a beautiful archipelago and series of low-lying bridges. This is certainly not for the faint-hearted, as the road incorporates twists and turns through one of Norway’s most dramatic, storm-prone seas and across the awe-inspiring Storseisundet Bridge – the tallest of the road’s eight bridges and a curved architectural feat that, when viewed from certain angles, appears to drop off straight into the sea.

Want another Scandinavian route to be dazzled by? How about:

Iceland’s Route 1 is a ring road, running around the edges of the island nation and taking drivers through some of the world’s most dramatic scenery. Setting out eastward from Iceland’s cosmopolitan capital, Reykjavik, Route 1 leads drivers on a magical tour of the country, passing stunning fjord, mountains, tiny fishing villages, and roaming wild reindeer. Must-see sights are aplenty, but a couple of bucket-list-worthy mentions include the stunning Seljalandsfoss waterfall, the beautiful Lake Mývatn and its hot springs, and the Jökulsárlón glacial lagoon.

In the next part of this series, we’ll look at some of the scenic routes you should make space for on your bucket-list from other parts of the world, including a few special ones from Down Under. In the meantime, why not share some of your favorite routes in the comments below?